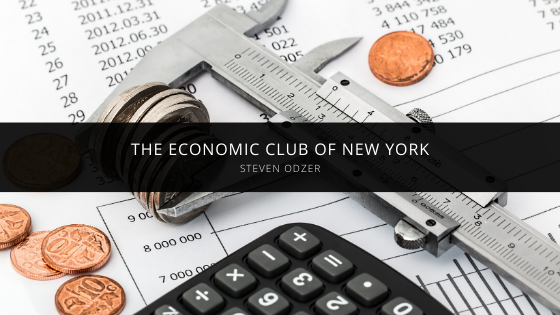 Modeled after the Economic Clubs of the Boston Area, the Economic Club of New York has been around since 1907. Ever since its founding, the Economic Club has been a place where their members can go when they want to engage in constructive debates and thoughtful discussions with regards to issues of the era. For example, in the 1910s, members of the club debated topics such as the women’s suffrage movement and U.S. income tax.

The decision to join the Economic Club was influenced by a piece of advice Steven Odzer’s father gave him when he was a young man. “My father taught me to surround myself with important people,” says Steven. He never forgot the words of his father. In fact, two of his current business partners are billionaires, and he makes business connections everywhere he goes.

Steven Oder gets his inspiration from the business connections he makes along the way. “I’m a strong supporter of the Republican Party and the RJC, so it was an honor to attend the event, says Steven Odzer. He has been quite open in the past about his involvement with the Republican Jewish Coalition, a trait he inherited from his father. Steven’s father, Seymour Odzer, received a lifetime achievement award for his work in the Jewish community. An award, which Steven Odzer happily accepted on his father’s behalf at the Ahavas Torah Center’s celebration of 8 Years of Torah and Community Growth Gala.

Thanks to his, “nothing is impossible” mentality, Steven Odzer has enjoyed a successful career of 30 years in the distribution industry. He is the CEO of YBT Industries of Henderson, NV. In his role as CEO of YBT Industries, Odzer helped orchestrate a deal between the Vegas Golden Knights and BT Supplies, in which BT supplies will become the official supply partner. Also, the terms of the agreement will change the name of the Vegas Golden Knights Community Arena in Henderson, Nevada, to its new official name, “Lifeguard Arena in Henderson.” Before starting YBT Industries, Steven Order led Paper Pro Inc. and GlobalSupplyNet.com.

When he’s not involved in hockey or the distribution industry, Steven Odzer likes to help worthy causes. He is a big supporter of Jewish and non-Jewish causes, the Arab-Jewish business cooperation, and agencies that help people with disabilities.